Shevchenko Monuments Around the World

Immediately following his death, progressive forces began a movement to preserve the memory of Taras Shevchenko. The Russian sculptor M. Mikeshin's sketches for the monument entitled "Russian Millennium" in Novgorod and the one to Bohdan Khmelnytsky in Kyiv, revealed that he was planning to incorporate either the figure of Shevchenko or personages from his poems. However, the tsarist government prevented the realization of this project. Shevchenko's literary friends and admirers made many appeals to the government requesting permission to raise funds for a monument to him. Unfortunately, their attempts were unsuccessful.

Prior 1918, attempts to commemorate Shevchenko were either amateurish or privately sponsored. In 1881 a small bust of him was mounted in Mangyshlak. It existed only until 1920. In 1899 a marble bust by the Russian sculptor V. Beklemeshev, was placed in front of the Women's Sunday School on Khrystya Alchevska's estate in Kharkiv. She was school principal at the time. In 1903 another monument was raised in Sedniv, Chernihiv province, on the estate of Lyzohub (sculptor F. Balavensky). It was destroyed in 1943 during the Second World War.

The people's reverance for Shevchenko is reflected in the numerous monuments to him throughout the cities and villages of Ukraine. Construction was by local craftsmen and the work was funded through public donations. Among the many villages where the statues can still be found are: Kolomyia, Kosiv, Vovchyntsi, Nadiiv in Ivano-Frankivsk province; Lysynychi, Vynnyky, Pustomyty, Dobriany in Lviv province; Loshniv and Dobromyry in Ternopil province; Zavadiv village, near Drohobych.

Following the October Revolution 1917, responsibility for commemorating Shevchenko came under government jurisdiction. In 1918, statues to Shevchenko were erected in Moscow (sculptor S.Volnukhin) and Petrograd, (sculptor Ya. Tilberg). The same year, a temporary monument finance by popular donation was erected in Romny, Sumy province (sculptor I. Kavaleridze). Temporary statued were placed in Kyiv (1919 sculptor F. Balavensky), in Kharkiv (1921 sculptor B. Kratko), in Odesa (1920), in several villages in the Mirhorod region (sculptors unknown); and in Brovary and Kniazhychi, Kyiv province as well as elsewhere. A three-metre granite statue by the amature sculptor A. Panasenko was mounted in the village of Lesky, Cherkassy province and in 1924, a two-metre bust by the amateur sculptor Bulah-Hrypych was mounted in the town of Bohodukhiv, in Kharkiv province. Among the monuments to Shevchenko created by the sculptor K. Tereschenko were the original statue in Kaniv (cast, iron, 1923) and the ons in Shpoli (cement and brick, 1926), in Horodysche (cast iron and granite, 1926), in Kerelivka (1929) and in Moryntsi (1939) , where Shevchenko's parental home was located. The latter to two statues were replaced by those created by the sculptors M. Vronsky and O. Oliynyk, and the architect Zvarov in 1956 and 1957.

In 1925 the Government proclaimed the Taras Shevchenko burrial site and the surrounding lands a state preserve. In 1939 two outstanding monuments to Shevchenko were erected in Kaniv and in Kyiv respectively (sculptor M. Manizer, architect: E. Levinson). The statue created by the sculptor I. Melgunov and erected in Konotop in 1939 was replaced in 1959 (sculptor Ya. Krasnozhon).

In the period following World War II, aproximatelly about 200 monuments to Shevchenko were built in the towns and villages throughout Ukraine. The most notable of these were erected in Dnipropetrovsk (cement, granite, 1949; sculptor Ivan Znoba- replaced in 1959 by a cast-iron statue by sculptors I. and V. Znoba and architect L. Vytvytski; in Mukachevo (reinforced concrete, 1952; sculptors: S. Rykhva and Y. Dzyndra); in Donetsk (bronze, granite, 1954; sculptors M. Vronsky and O. Oliynyk, architect V. Shaparenko); in Sumy (reinforced concrete, 1957; sculptor Y. Krasnozhon); in Yahotyn (1959; sculptor Mykola Malynka); in Lozivka, Ternopil province (limestone, 1961; sculptors: Ya. Chaika, and E. Mysko); and in Korsun-Shevchenkivsky (acrylic resin, 1960; sculptors: M.Vronsky and O. Skoblykov). A significant event in the cultural life of the USSR was the raising in 1964 of the bronze-and-granite monument to Shevchenko in Moscow (sculptors: M. Hrytsiuk, Yu. Synkevych, A. Fuzhenko, architects: A. Snytzarev, Yu. Chekaniuk). Monuments to the bard also stand in Fort Shevchenko on the Mangyshlak peninsula ( cast plaster, 1927; amateur sculptor Atrau), in Ashkhabad (bronze, granite, 1972, sculptor M.G. Lysenko; architects A. Ihnaschenko and A. Akhmetov) and in Tashkent, Uzbekistan.

The poet's great reknown has spread far beyond the borders ofhis homeland. In 1951 a monument to Shevchenko, Ukraine's generous gift to Ukrainians in Canada, was erected in Oakville, near the city of Toronto (bronze, granite, sculptors: M. Vronsky and O. Oliynyk; architect V. Hnezdilov). The statue was stolen from the Oakville park in December 2006 and only the head of the statue survived. It is located in the Shevchenko Museum in Toronto. Another monument to Shevchenko in Canada was erected in Winnipeg in 1961. Three years later, in 1964, a Shevchenko monument was placed in Washington D.C. In 1979 a bronze-and-granite bust of the poet was mounted in Arrow-Park, near New York City (sculptor V.Borodai, architect A. Ihnaschenko). Sculptor Arhipenko created a statue of Shevchenko that is located in Soyuzivka Resort, Kerhonkson, New York State. In 1971 the first monument to Shevchenko appeared in Buenos Aires, the capital of Argentina (granite). The bust of Shevchenko, erected in France in 1974, was a present from the city of Kyiv to Chalette-sur-Loing (bronze, granite, sculptor O. Skoblykov; architect O. Malynovsky). Another monument to Taras Shevchenko in France was unveiled in Paris. There are two monuments to Shevchenko in Brazil. One was unveiled in Curitiba in 1967; another one, located in Prudentopolis, was erected in 1989. There are Shevchenko monuments in Italy, Poland and Romania. The most recent monuments to Shevchenko were erected in Tbilisi, Georgia (March 2007) and in Budapest, Hungary (July 2007).

People of all races, nationalities, beliefs and political views see the erection of monuments to Shevchenko as a demonstration of deep respect and love for Ukraine's national genius, and as international recognition of his contribution to world culture. According to the former director of the Shevchenko National Museum in Kyiv, Serhiy Halchenko, there are now over 600 Shevchenko Monuments in the world. 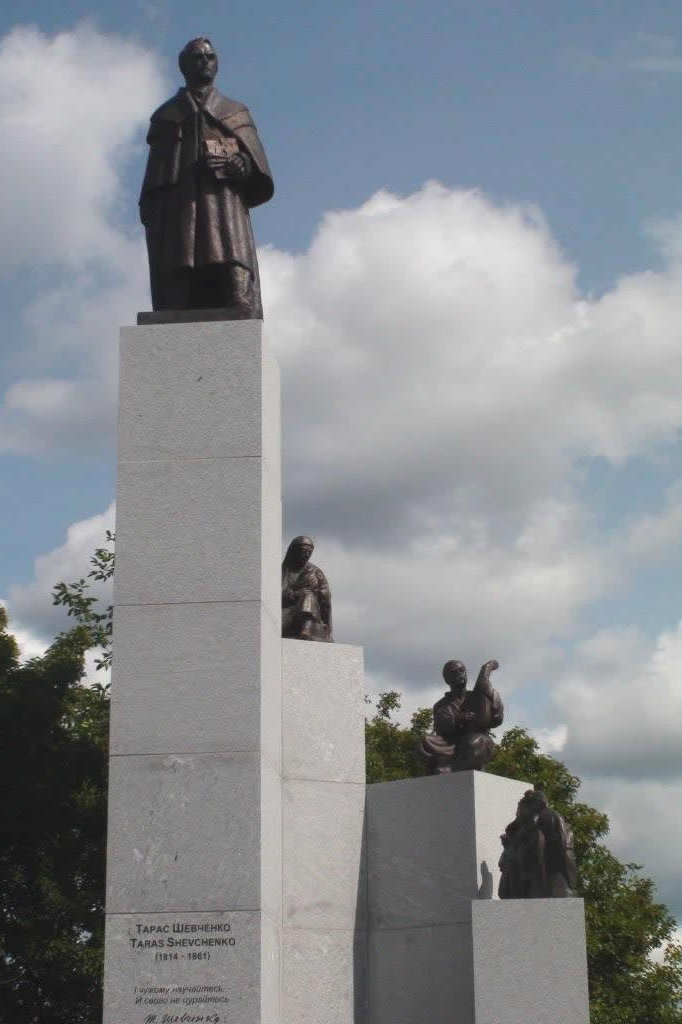 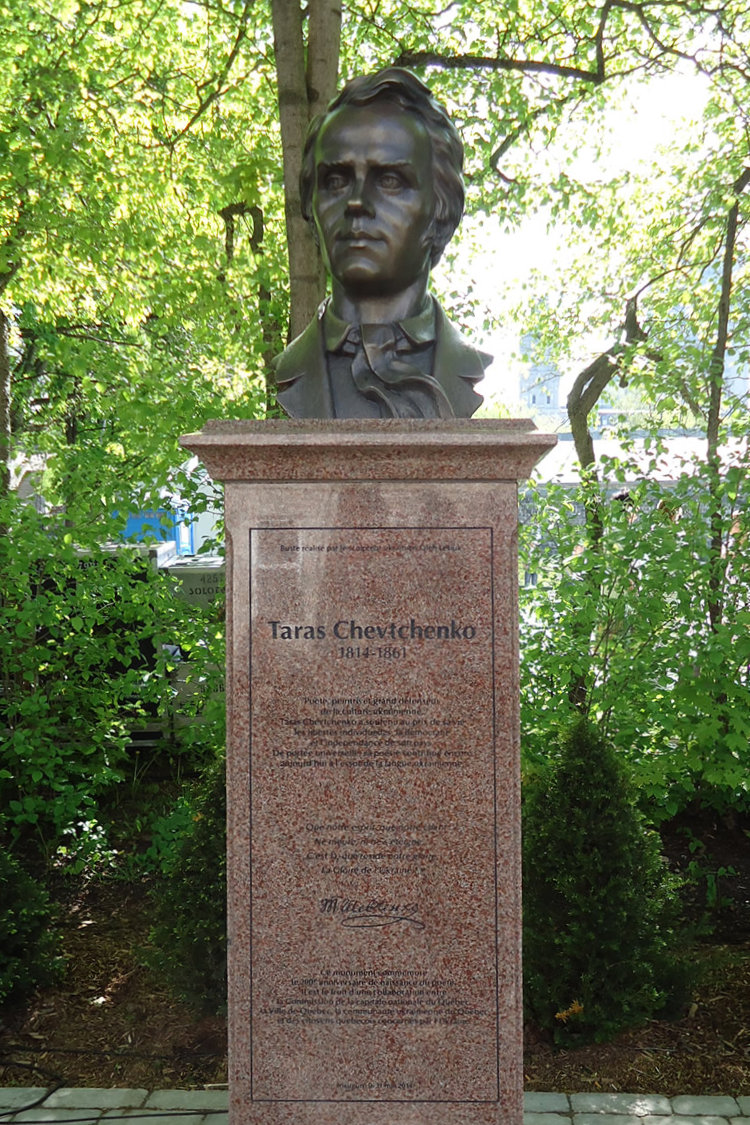 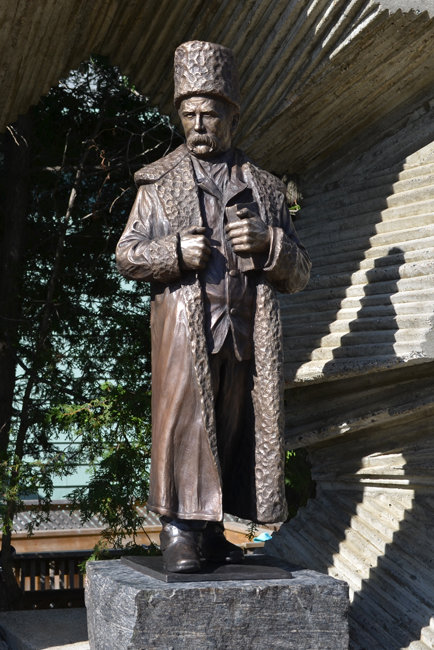 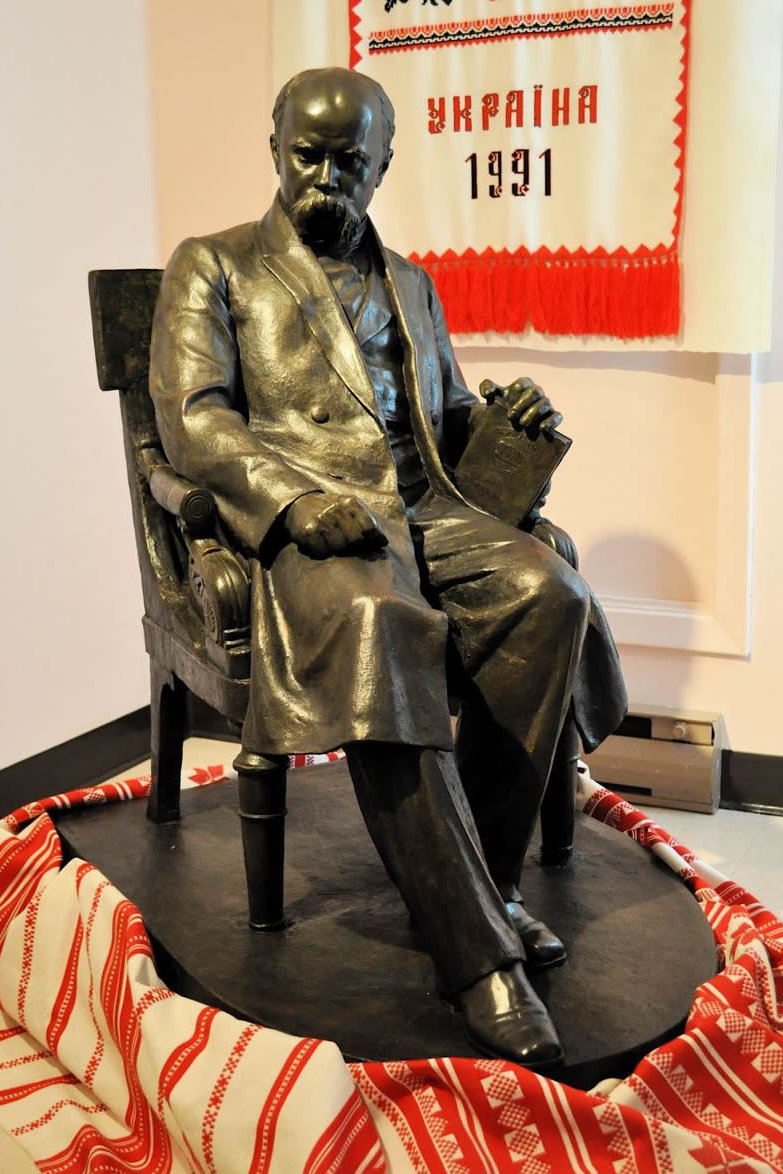 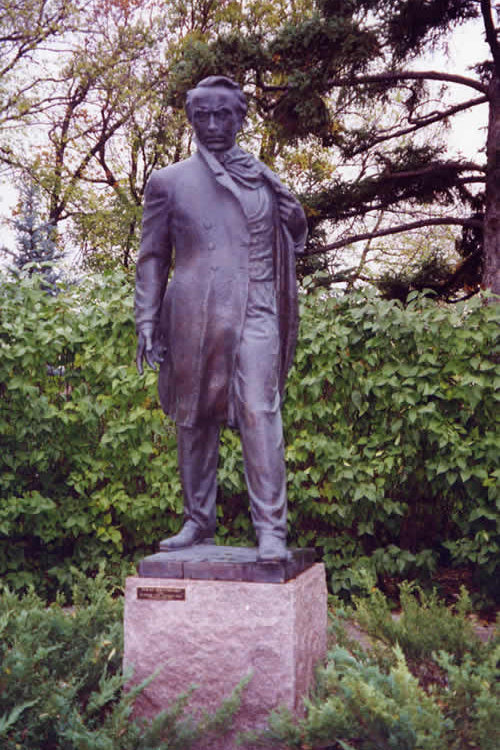 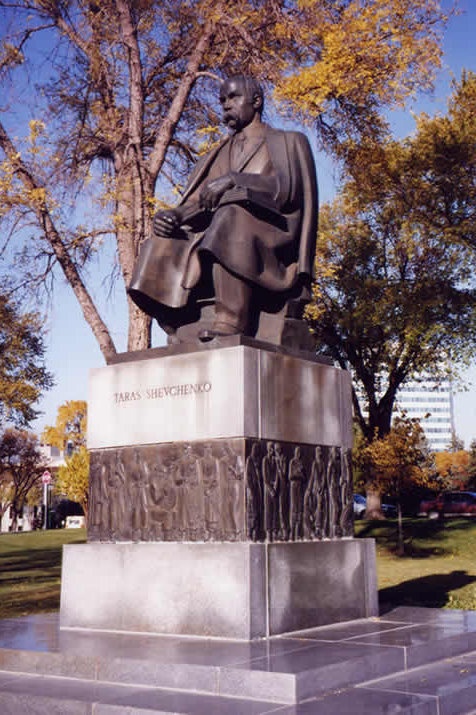