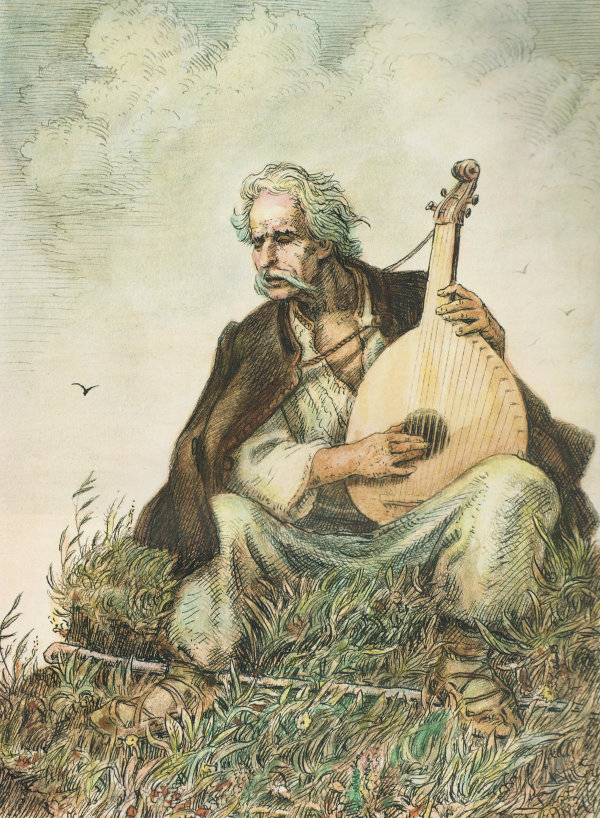 Ukrainian folklore had an immense influence on Taras Shevchenko’s poetry.  This is evidenced through his frequent employment of motifs, images, symbols, rhythms and poetic style, with the themes of his early poetry being the closest to those of Ukrainian folk songs.   However, Shevchenko did not copy folkloric models but  creatively reworked them, imbuing them with new, lofty perceptions.  This, in turn, influenced the general populace to adopt his poems as popular songs of the day.

Of all his lyrical poems, the ones dealing with loneliness, seeking a better lot, separation from loved ones and women’s fate most often evolved into songs. All of them, like many songs of this genre, are written in a minor key with long, drawn-out melodies, or in the Romance style. Also set to music, were Shevchenko’s beautiful and descriptive landscape lyrics found in passages from ballads and poems with their spiritual depictions of nature. Among them are “The Mighty Dnieper”, “Beside the Cottage Cherry Tree”, “O Boisterous Wind”, etc. His poem-meditations, such as “Thoughts of Mine” and “The Days Go By” often became songs, as well.

Shevchenko’s political lyrics introduced an entirely new dimension into song.  A prime example was “My Testament” followed by “With Stark injustice all around” (excerpt from the poem “The Heretic”) and others.  Both express an active call to battle.

Once they entered the folk repertoire, songs based on Shevchenko’s lyrics developed of life of their own.  They have been popularized by both amateur musicians and professional composers.

Some of Shevchenko’s poems became songs in his own lifetime.  Among them are "Tyazhko-vazhko v sviti zhyty", “Nazho meni chorni brovy”, “Such is Her Fate” (excerpt from the poem “Bewitched”).  In 1860, the poem “Thoughts of Mine” was set to music by O.Rubets.  In 1868, music for “My Testament” was composed by Mykola Lysenko.  Later, “My Testament” was set to music by M.Verbytsky, H.Hladky, K.Stetsenko and others.

More than eighty songs, based on the lyrics of Shevchenko, were composed by Mykola Lysenko.  This tradition was followed Konstantyn Stetsenko (“Evening”, “The Eagle Soars, the Grey One Soars”), Yakiv Stepovy (“Thoughts  of Mine”, “O My Beauteous Star of Evening”, “The Wind Blows, Speaking With the Grove”), Stanyslav Lyudkevych, (“The Sun Sets”), Vladyslav Zaremba, (What do my black hairs avail me”, “I am Rich and Beautiful”), Andrij Shtoharenko (“Shoes in Visions, Shine Entrancing...”), and others.

Facilitated by the efforts of subsequent generations of amateur and professional composers, to this day, Taras Shevchenko’s poetry continues to be incorporated into the popular repertoire.

Visitors are invited to share music files for this page by submitting your mp3-files to shevchenkomuseum@bellnet.ca